I'm adding my pictures and stories from my Africa trip here now... But it'll take some time... so please, be patient... I advice you to start with the oldest note and work you're way back to the present day. Then you'll get everything in the "right" order.

If you are only interested in the pictures, have a look at the pics to the right here.

On the second day at the course we were going on a morning walk with Brian. We had to leave camp at 6.30am in order to use the light and not be out there in the mid day sun (which is soooo strong)

I'm so impressed by the way Brian and Ralf spots everything. Tracks, animals, smells, signs of activity and just reading the environmet and reacting to it. Saw a small croc by Nlangaluwe pan and then some elands (biggest antilope in the world) in the far distance. I'm stunned! This is life!


When we got back to camp, it was time for some proper breakfast!! Man I was hungry. We walked for about 3 hours without anything els than coffee and rusks (skorpor) in out stomachs.

The drums (wake up call) went off at 6 am, then we had some coffee and rusks ("müsli skorpor"). To be honest, I hadn't sleept that good during the night. Heard a lot of noises which made it a bit hard to relax... I was convinced that it was something big, aggresive and meat eating animal outside our tent during the night. I could hear a lot of barking. Thought it was baboon and was afraid that they was about to enter the tent!!!
But in the morning (or during the day) I found out that it was the impalas!!! hahaha We got shit scared of impalas! very funny!
But after laughing a lot and a few cups of coffe we started to get a bit warmer (it was only 3-4 degrees in the morning) and was able to start the lecture, about 7am. But we just got started with the introduction, when Brian (one of the guides) came running. Telling us to pack our bags and a lot of water to drink. We were going to join the Kruger Vet (Marcus) and Sections Ranger (Sandra) when they were going to anesthetize and tag some of the rhinos. Yay!! So we left the books and headed of in the jeeps.
We headed of to Palms Spring (an area where the rhinos usually are) and talked to one of the trackers that was waiting for the chopper (with the vet and section ranger).

The film crew is doing an interview with Brian while he's driving.
He's explaining why we need to follow and stay close by.


Marus is explaining why they are tagging the rhinos ears
And then, when we where ready, he did a full description of what happened and why.
And off they whent!

Took a quick shower after the night drive, listening to the hyenas howling close to camp! Soooo cool sound! I'll try to record it for you! But wow, what a first day ey?!
Posted by Sara Schörling kl. 17:56 1 comment:

Finaly, time to begin my adventure!!!
The flight down to Johannesburg took about 15 hours, incl a connecting flight in Amsterdam. I left Landvetter at 6.40 am on the 19/7. 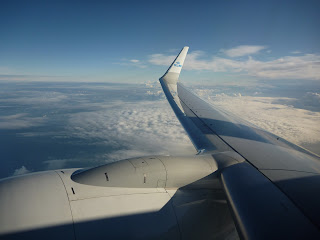 I stayed at a hostel close to the airport (Emerald guest house) since I arrived at 11 pm that Tuesday night. It was a nice place but freeeeezing cold in J-borg!!! It couldn't have been more than 3-4 degrees! I slept in my long johns and a extra blancet. This is the room I had (door to the left). Forgot to take a pic of the inside...: 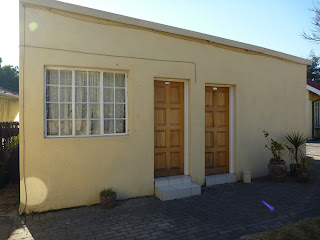 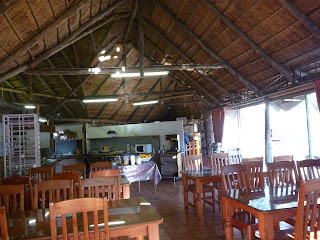 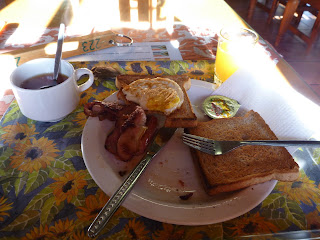 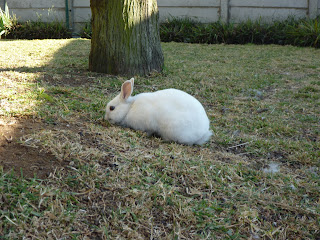 Small pool just outside the dining area (almost fell into that pool when I arrived the first night, since it was pitch dark and they parked the tranfer bus just next to it!) 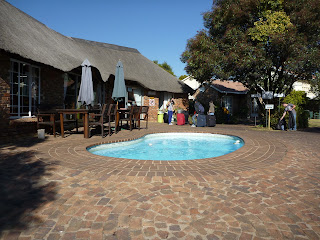 A bigger pool in the backyard (I did not swim in it...it might not look cold but it was freezing. They had snow 1-2 weeks later)
sdfalsdfasd 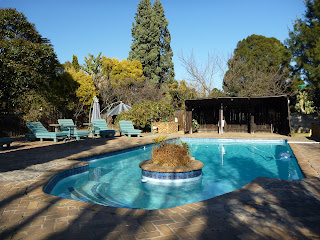 On the 21/7 it was time for me to go to Neilspruit, were Andrew (one of the students in the Game Ranger course) where suppose to pic me up on the 22nd and then drive to Makuleke Camp up north. I had booked a bus ticket with City Bug. I hade some trouble to pay the ticket, but I arranged that when I jumped on the bus at the airport. The ticket price was 350 Rand (=350 sek) for a 4 hour trip. 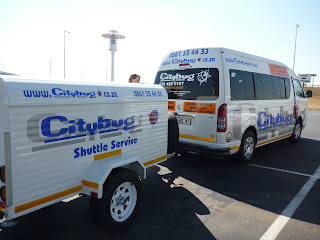 Just some funny info in the inside of the bus...the most important part (that you are more than welcome to tip the driver, is almost bigger that the safety info) 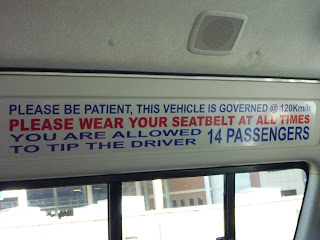 It all started as a dream.... but now I'm actually going to to the true wilderness of Africa!

My booking has finaly been confirmed! I'm now gladly able to let you know that my next trip will be to South Africa, for 8 lovely weeks this summer (their winter)!!!

The purpose of this trip is to attend some field guide courses in the famous and fantastic Kruger park and learn about the daily work to preserv the park, how to guide tourists and the most exiting thing of all: learn how to track wild animals!

These courses are provided by Eco training and in this map you can see the locations of their camps.

This is my schedule for the trip: 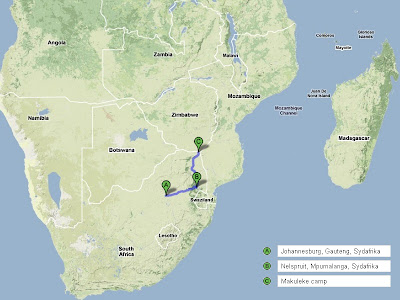